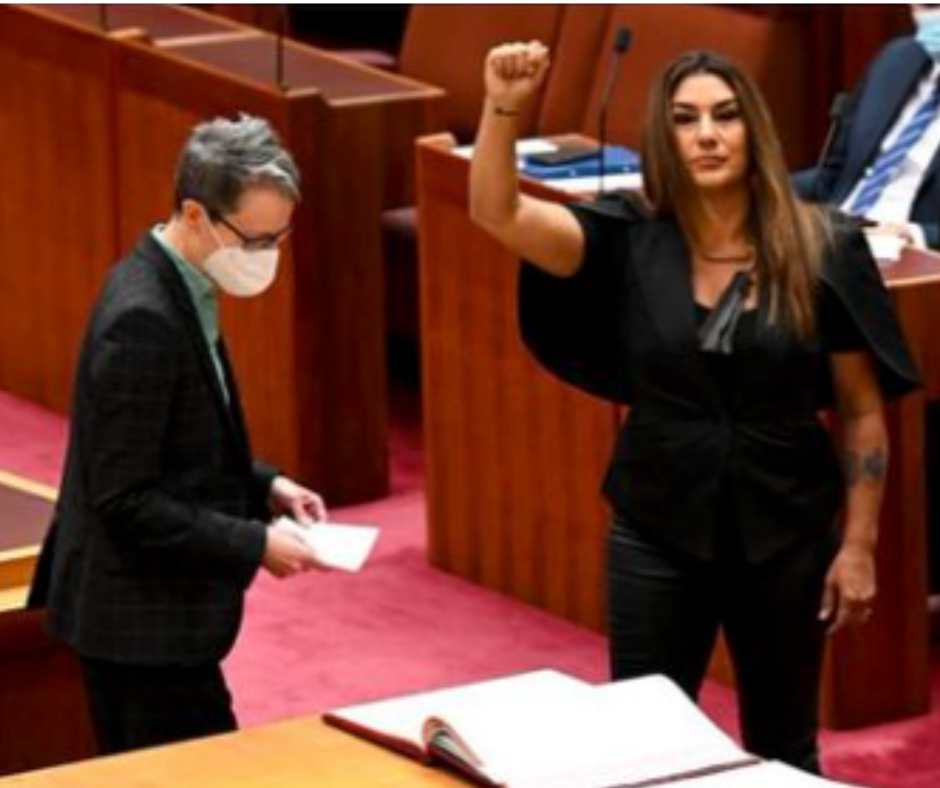 Who does Greens Senator Lidia Thorpe think she is?

Like Napoleon crowning himself emperor at Notre Dame in 1804, Thorpe today decreed herself “sovereign” in the Australian Senate.

And in a two-finger salute to Her Majesty Queen Elizabeth, Thorpe sledged the real sovereign as the “colonising” Queen.

Like an Antifa thug fresh from smashing glass and burning property, she marched to the Senate’s centre table to take the oath fist raised, dressed in black.

The only thing missing was a hoody.

She kept her fist up as she disrespected the parliament.

“I sovereign, Lidia Thorpe, do solemnly and sincerely swear that I will be faithful and I bear true allegiance to the colonising Her Majesty Queen Elizabeth II.”

Other Senators interjected saying “you’re not a Senator” before the Senate President intervened.

Thorpe wants to burn Australia down but no one is sure what would replace the institutions of civil society that provide equality under the law for all Australians regardless of racial background.

Her Greens leader Adam Bandt tweeted approvingly “always was, always will be” in a reference to ownership of the Australian land mass.

Do the Greens believe we should cede our house titles? If they do, they should say so.

Australia works because it has a sovereign who is not a politician.

Queen Elizabeth is a living reminder of power with grace, setting the tone for those who hold high office from the Governor General at Yarralumla to the humblest backbencher sharing a flat in Canberra’s Kingston.

The Monarch, who draws his or her authority from God, reminds politicians that there is a God and it is not them.

The Greens believe in the pantheist Gaia, not the Almighty God of the preamble Australia’s founders wrote into the constitution.

But Thorpe and the Greens are a law unto themselves.

Price sought to unite all Australians in the noble task of ending violence by indigenous perpetrators against indigenous women and children in indigenous communities.

She rejected the idea that most Australians were racist.

Thorpe shows us that this is a very real danger but Price gives us hope that we can move forward in a constructive and unified way. I believe that the Australian people want to see the situation of many aboriginal people improved – I certainly want that.

For 30 years the Greens have been dragging Australian politics to the radical left.