Libs back sexualisation of children, Dad reported to cops  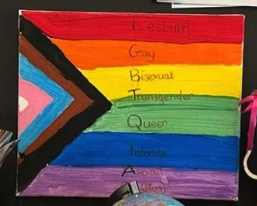 A before and after school care centre in Sydney reported a father to police after he complained they were sexualising his five-year-old.

The walls of the childcare centre were covered with the political flags of various sexual identities, some of which had been coloured by children.

As Sky news host Cory Bernardi said last night, this can only be described as grooming.

The father said Police phoned him to say he did not have a case to answer.

It was a chilling experience, nonetheless, given NSW police stations are often plastered with political posters supporting radical LGBTIQA+ ideology.

The lobby group that represents out of school hours care facilities, the Network of Community Activities, defended teaching children these sexual concepts.

CEO Pauline O’Kane told the Telegraph the Roseville centre had been assessed by regulatory authorities from the Perrottet Liberal Government.

In a message to parents that her centres are backed by the government in knowing what’s best for children, O’Kane said: “It’s about raising children with inclusive attitudes.”

Clearly she thinks complaining parents like the father of the Roseville five-year-old are bigots worthy of reporting to the police.

“I don’t think we should curtail children’s inquisitiveness, and I am sure this centre did this in a positive way,” she said.

Too bad that a parent disagreed, they have no rights under LGBTIQA+ ideology.

The irony is that without childcare centres like Roseville Kids Care indoctrinating children with radical LGBTIQA+ sexual concepts, they would have no cause to be “inquisitive” about such things.

It is only discredited Freudian psychology and Queer Theory which sees children as sexual beings.

Civil society protects the innocence of children, something rainbow ideology is violently against.

The Roseville incident is the second time this week Liberal governments have been exposed for acquiescing to Queer Theory.

A Morrison Government trial erasing mother with “birthing parent” on Medicare forms was axed this week after a mother complained.

Despite Labor’s Bill Shorten binning the “birthing parent” form as soon as it became an embarrassing issue for the government, the Labor/Liberal/Green/Teal quad of Australian politics overwhelmingly supports and protects the gender-fluid indoctrination and LGBTIQA+ sexualisation of children in schools.

Family First is raising a political movement to stand candidates for parliament who will fight for parents’ rights to protect their children’s innocence.