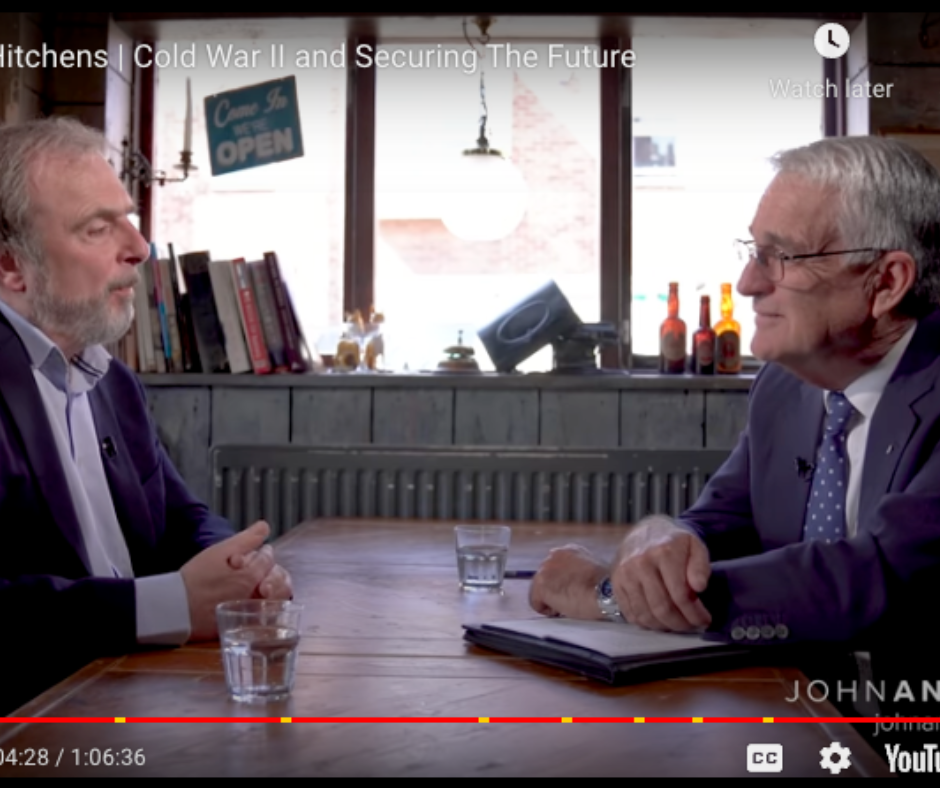 Those of us working to turn the political and cultural tide often feel the enormity of the challenge.

We feel more like we are trying to climb Mount Everest without oxygen or making a lone stand against an orc pack armed only with a walking stick.

Many of us look for inspiration from wise leaders and there are few wiser than former Deputy Prime Minister John Anderson.

His regular Conversations podcasts give some solace for the battle weary.

However, a recent interview with prominent UK commentator Peter Hitchens, brother of the late atheist Christopher, shone a bright light on the growing debate about whether we should fight or retreat to the catacombs and wait it out.

Peter Hitchens is a former war correspondent, he’s an author and currently writes a column for the Mail on Sunday

The context was a long conversation about the war in the Ukraine (Russia’s invasion is evil, but it is not Gandalf versus the orcs) finishing with furrowed brow musings on the rapid decline of the West.

In the last five minutes of the podcast, the following fascinating exchange took place.

JA: There are those who would say your prognosis for western society and the advancement of western civilisation more generally is too negative.

PH: Well, I hope they are right.

PH: I really hope they are right. But I actually think they are wrong. I’m afraid it’s even worse.

JA: Let me run this idea by you. I’ve run across highly intelligent people in Australia who would agree with your analysis but say ‘hang on, let’s not overlook the possibility and importance of trying to do what the monasteries did…

JA: Not only that, keeping alive the learning, the commitment to freedom, the sort of concepts that have undergirded our way of life….

PH: But how do you do that?

JA: Well that’s the question. Are there ways? They are starting new institutions, they are fighting the decay, which you’ve been doing and you’ve become, I think if you don’t mind me saying so, you become a bit frustrated that people won’t listen. But people are trying it, they want to have a go.

PH: Good luck to them. I’m not against people trying. I’m not even going to say I think they will fail but at the moment it looks pretty dark to me. One of the worst things about it is the lack of alarm.

I was on a run listening to this through my Airpod Pros but I stopped in my tracks.

For those of us who are political and cultural warriors, this has always been the problem.

But when two mild mannered statesmen, both intellectual giants, are saying this, will we not wake up?

Immediately prior to this exchange, Anderson asked Hitchens for his take on the UK Equality Act, introduced in 2010, which purportedly was to stop discrimination on the basis of race, gender and sexuality (Australia has similar laws).

Instead, Hitchens claims it has led to “soft totalitarianism” against dissenters of same-sex marriage, the transgender agenda, critical race theory or other bastions of cultural Marxism.

“How do people think the Enlightenment comes to an end – by a boot stamping on the human face?

“It comes softly, gently and slowly, almost kindly and then after 20 or 30 years of it there is no real freedom of speech or thought.”

Despite Hitchens’ melancholy view of the state of our politics and culture, Family First is committed to raising a party-political voice for freedom of speech, association and religion.

What choice do we have?

As Hitchens said of people like us having a crack: “Good luck to them. I’m not against people trying. I’m not even going to say I think they will fail…”

He may well be right if no-one is prepared to stand up and oppose this decline into darkness.

Afterall, evil things happen when good people do nothing but we don’t have to throw our hands up in despair and do nothing.

We can join a movement. We can push back and not by ourselves, alone facing the world but rather with a group of likeminded individuals prepared to risk a backlash to make our society better.

Family First is that group and you can join or support to contribute to the fight.