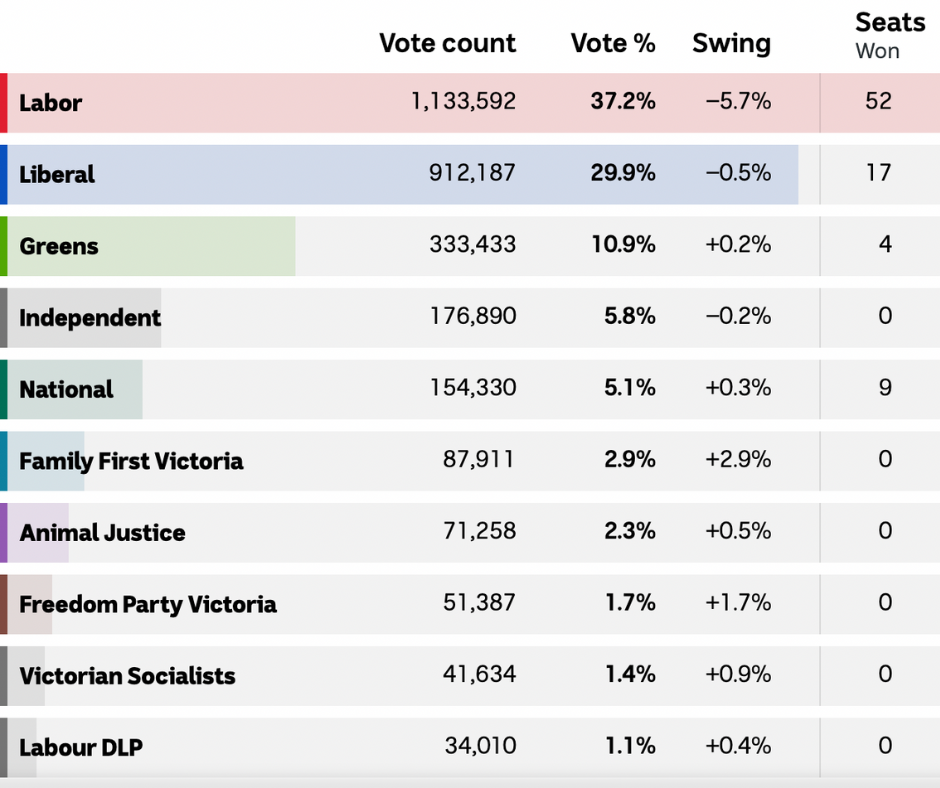 While we didn’t win seats in the lower house, Family First performed extremely well in the Victorian election.

Counting continues in the upper house and while we aren’t confident of winning a seat, you never know until all the votes are counted.

Garnering almost 3 percent of the state-wide vote, Family First was the party with the fifth biggest vote behind Labor, Liberals, Nationals, and Greens.We came sixth overall (click on “all parties” tab) once the independent vote is factored in.

For a party that had been shuttered for five years and was not even registered with the Victorian Electoral Commission until October 6, this was a tremendous effort.

It is a credit to our candidates and volunteers. Supporters from around the nation also backed our Victorian campaign in the national interest.

There’s clearly a credible voter and energised supporter base upon which to build.

Political commentary this week has only confirmed Family First’s re-birth as a significant player in Australian politics.

Much of that commentary mirrored what Family First said the morning after the Liberals’ thumping defeat by Dan Andrews – being Labor lite is a losing strategy.

Peta Credlin in the Australian observed:

On cultural issues, the Liberal opposition also supported Labor’s laws allowing people to change their gender annually and to criminalise any attempt to dissuade them.

They’d never opposed Labor’s plans for supposedly safe injecting rooms or questioned Labor’s support for gender fluidity programs in schools. They’d expelled from the state Coalition partyroom a long-serving MP because he was anti-abortion and they’d banned from the partyroom, should she be elected, a candidate whose father was a member of a conservative Christian church – despite being a party that’s supposed to believe in freedom of speech and freedom of religion.

This translated into the Liberals losing seats or failing to win target seats in eastern Melbourne.

The Age observed that parties like Family First hurt the Liberals.

Central to the opposition’s struggles in these areas – where it lost between 7 and 11 per cent of first preference support – was a shift towards right-wing micro parties such as the Freedom Party, Family First and Democratic Labour Party. These groups, which campaigned on a mix of anti-lockdown grievances and social conservatism, won an average vote share of 5.75 per cent in the five seats listed above.

Another writer in the Australian, veteran commentator Greg Sheridan, explained why Family First preferenced against Liberal leader Matthew Guy on our how to vote card in his seat of Bulleen.

In Victoria, Matthew Guy’s dismal Liberals surrendered on every single battle, assuming a bad government would then fall under its own weight. The Libs offered no vision, principle or consequence….

…..One result was that a miscellany of small right-wing parties, given almost no media coverage in the campaign, scored 7 per cent or so of the primary vote, compared with the Liberals’ 29 per cent. Family First, which won nearly 3 per cent of the vote, preferenced Guy last on its how-to-vote card in his Bulleen electorate.

…..Certainly elections are generally decided on core issues that affect voters’ lives – cost of living, national security and so on.

But values issues also affect voters’ lives, such as the lies they tell our children in schools.

Peta Credlin summed up why Family First has a big future.

She said the Liberals are “dancing with the left, and then wondering why its supporters look to minor parties on the right when disappointed with their lack of Menzian clarity”.

The Victorian election showed there is a big space vacated by the Labor, “modern” Liberal, Green and Teal quad which all believe the same woke things.

Family First supporters’ willingness to take up the fight augurs well for the future.