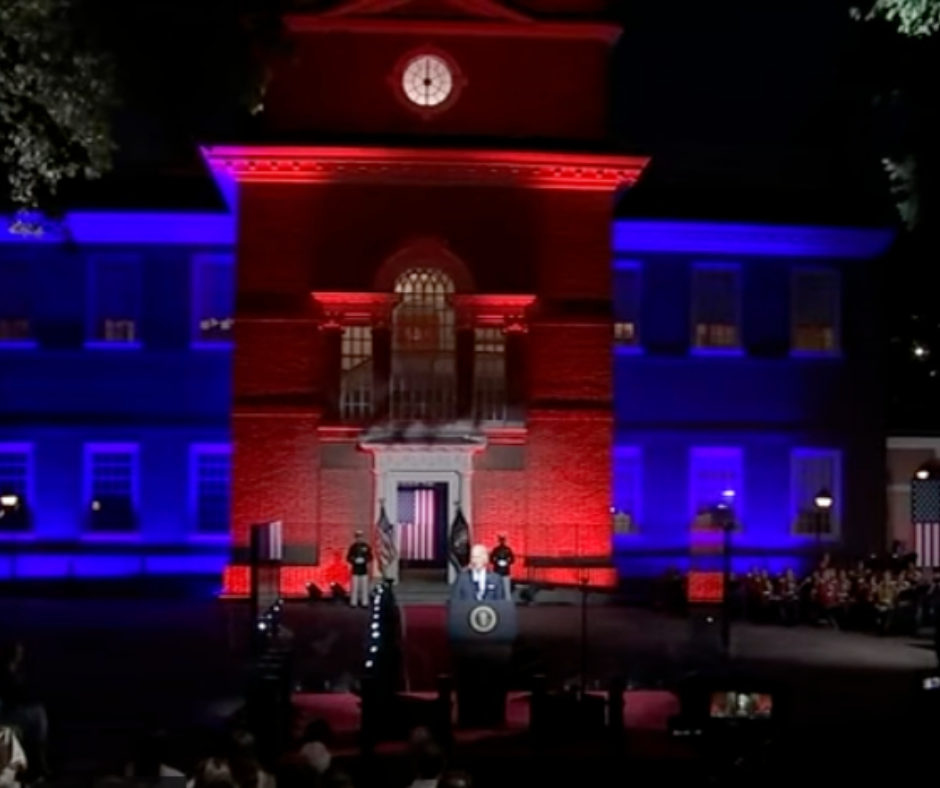 Anyone who is pro-life, or pro man-woman marriage is now seen as a bitter enemy of the state by leftist politicians.

Joe Biden’s bizarre “battle for the soul of the nation” speech in Philadelphia last week singled out both groups of people as part of what he calls a “threat to democracy”.

As someone who wishes to see unborn babies protected and marriage strengthened, this was confronting and chilling to hear.

We were once tolerated but no longer.

Speaking of Donald Trump supporters but including all pro-family people, he railed against “forces (that) are determined to take this country backwards, backwards to an America where there is no right to choose, no right to privacy, no right to contraception, no right to marry who you love”.

It’s extraordinary that the only policy disagreements Biden targeted were those held dear by social conservatives.

“Right to choose” of course is a euphemism of the radical left for killing of unborn children all the way to birth.

“Right to marry who you love” is a euphemism for redefining marriage and forcing everyone to comply with radical LGBTIQA+ gender fluid ideology and its accompanying speech codes.

Just look at what happened to Irish teacher Enoch Burke who was jailed for refusing to call a boy a girl.

These are frightening times for those of us who dissent to the radical left’s view of life, marriage and family.

Daniel Andrews, the most radical of all Australian political leaders, has changed the law to drive a wedge between parents and children and even have schools hide gender transitions from parents.

If you pray for your gender-confused child at his or her request in Victoria you could go to jail.

The left are turning liberal democracies into totalitarian states and Biden’s rhetoric reinforced this trend.

During his 25-minute address at Independence Hall, where the Declaration of Independence and the US Constitution were both drafted, the only policy issues Biden mentioned were abortion and same-sex marriage.

It’s almost as if these issues are litmus test issues for the radical left in their relentless culture war.

Biden made no mention the inflation caused by his shutting down of resource projects. He didn’t mention the invasion of illegal immigrants on the US southern border which he has caused.

He was clearly attempting to distract people ahead of the midterm elections in November.

Like Biden, Daniel Andrews is also a supporter of abortion-to-birth laws. These were first introduced in Victoria in 2008 when he was health minister and have now spread to all states and territories except WA.

Using two Marines as props and ominous red lighting of the Independence Hall, Biden sought to strike fear into the hearts of people who do not agree with the radical left’s agenda to deconstruct marriage, family and the rights of the unborn.

The speech was a manifesto not just of the Democratic party in the United States, but it was an insight into how global leftists view those who dissent to their worldview.

He made it seem like anyone who supported a MAGA agenda or part thereof was “not normal” and was complicit with the violence of the January 6 riot on Capitol Hill.

This of course is completely untrue of the overwhelming majority of people who support a MAGA agenda or parts thereof.

One thing Biden got right was his observation that America was at an inflection point.

It can stay democratic and free or lose this by continuing to head down a dangerous totalitarian path with leftist politicians like Biden and Andrews stoking economic and social crises.

But make no mistake, people who believed what was normal until five minutes ago in history are now in the cross hairs of dangerous politicians.

Family First is fighting for your Australian family values to be first in politics. Join the movement today.