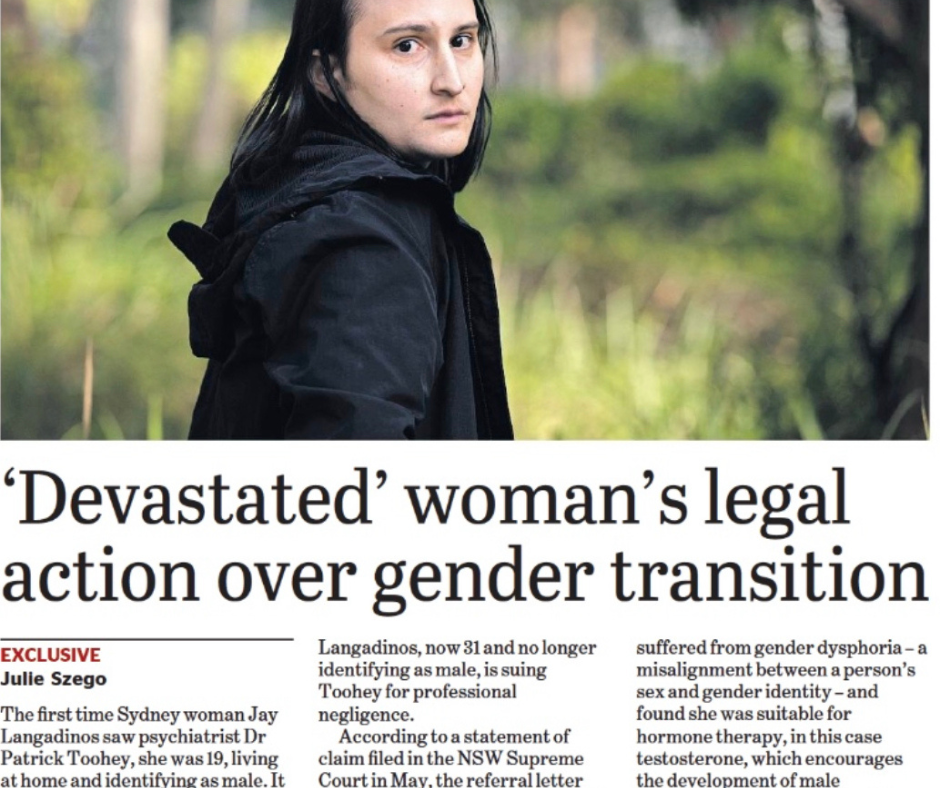 After years of ignoring warnings of the harms of LGBTIQA+ gender fluid ideology, the woke-left Nine newspapers have finally allowed a victim to speak.

The Sydney Morning Herald and the Melbourne Age – the Age on page one – yesterday featured the sad story of a woman who had her breasts surgically removed at 21 and her womb removed at 22.

Sydney woman Jay Langadinos was 19 when she thought she might be a man trapped in a woman’s body.

She is now suing her psychiatrist Dr Patrick Toohey in the NSW Supreme Court.

Langadinos claims Toohey “failed to take precautions” to avoid risk of harm “in the nature of loss of her breasts, uterus, fallopian tubes and ovaries”.

The irony of this story appearing in the Melbourne Age is that Victorian politicians from both Labor and Liberal have made it illegal for a psychiatrist to urge someone like Langadinos not to undertake so-called gender transition.

The government’s Human Rights Commission website warns people like Langadinos that no one is allowed to help them “even if you ask for help”.

Even a cry for help from a child to his or her parent must be ignored, or the parent could be thrown in jail.

This is not conspiracy, it is not hyperbole. It’s the law in Victoria.

That’s why it was remarkable that the Age published Langadinos’ story.

After years of championing rainbow ideology – including the law which would make it illegal for a counsellor to try and talk someone like Langadinos out of having her female anatomy cut out, the Age is yet to join the dots.

The snake is swallowing its tail.

Kerr believes the legal action is “likely to be the tip of the iceberg”.

“We can expect to see extensive litigation in future years related to gender-affirming cross-sex hormones and surgeries,” she said.

The Family First Party is committed to raising bold voices who will stand in our nation’s parliaments for family, freedom and faith. Join the political movement that will put your family first, sign up today.